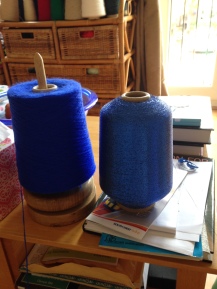 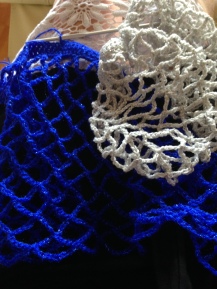 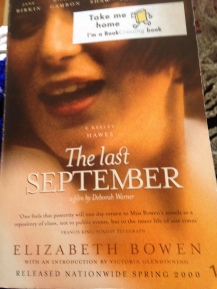 The book I’m struggling with 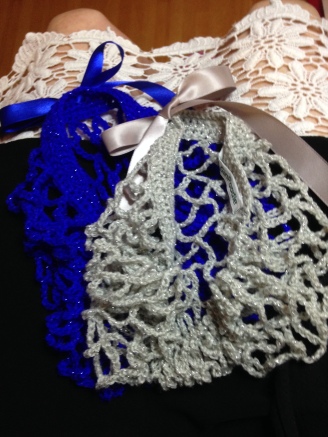 Things have gone a little quiet over the Easter weekend for me on Etsy orders so it gives me a chance to let you see the progression of an order I have just posted off to America.

I’ll take this picture by picture and explain what is going on. The first picture is the yarn I use to make the sparkly snoods, the cone on the right is super fine metallic blue lurex which I crochet in with the usual blue yarn.  The lurex is a funny thing, it is really quite strong but feels very delicate as if it would snap at any moment.  In the background of this pic you can see some of my snood making yarn, that wicker unit is crammed to bursting with the rest of my snood yarn and a small amount of Gin Poodle yarn also on the coffee table are a couple of books I’ve read and haven’t decided what to do with yet, a train timetable and a book and map that I intend to make paper flowers from.

Next pic is the snoods nearly finished, the silver one is pretty much done apart from adding the elastic, the ribbon bow and sewing in a label, the sparkly blue one  isn’t quite finished, I’m putting a neat edge along the hair band here.

Next up is the book I am struggling to get anywhere with (The Last September by Elizabeth Bowen) which I’m reading in between making things.  I just can’t get into it, I don’t like any of the characters and don’t really care what happens to them. I’m a quarter of the way through it so surely by now I should care a bit? I’ve set myself a modest target of reading 26 books this year and I’m already three books behind schedule. Ms Bowen is not not helping. Sometimes I just give up on a book I’m this apathetic about but this is a book I picked up through Bookcrossing so I feel like I owe it to its previous owner to let them know what happens to it so I’ll slog on.

The last two pictures are the snoods pretty much ready to go sitting on my bony knees – all I’ve got to do now is wrap them up in tissue paper and add some complimentary sparkly hair grips to the vintage postcard and send them off.  The postcard is just over 100 years old, I bought a job lot of them and while they last I’ll use them as my notepaper or hairgrip holders in all my orders.  This one shows Gertie Gitana who was a music hall actress also known as The Staffordshire Cinderella.  This one was written on and posted, nothing exciting though, just some bloke Dave asking after his mate Jim and saying he’ll be home soon because they expect to be sent off to France soon.  I wonder if he was a soldier in the First World War but he doesn’t say so expressly. If they are blank I usually write a message on the back but if they’ve been used I like to keep them as they are and just pop one in the package as a nice surprise. Not that it will be much of a surprise if the customer reads this post before the package arrives.

I am a vintage loving maker who loves embroidery, knitting a teeny bit of crochet and beading too. I have an Etsy shop (GinPoodle) where I sell my lovingly made 1940s style snoods (that's a sort of glamorous hairnet if you were wondering) and the occasional vintage knit. View all posts by Tanis Makes Stuff

1940s 1940s hair beading books craft fair Crafting crochet customer embroidery etsy Ginpoodle holiday knitting make-up reviews makeup reviews reviews scarf Sewing shawls shopping snood snoods sock knitting socks Today I'm Making twitter vintage hair vintage knitting vintage style work in progress workshops yarn yarn stash
This week's featured snood of my festive Spruce Green. It's the colour of the perfect Christmas tree, right now there's one small one in stock, the other sizes are coming over the next couple of days, if you'd like one for perfect Boxing Day easy hair there's a link in my bio to my Etsy shop.
This is how Christmas starts in my home. The decorations are going up this weekend and I'm go in to take some inspiration from this lovely book (don't go to Lapland with him!!) and watch some YouTube tutorials for inspiration.
This week's featured snood is brand new to my shop. It's made from cotton and is one of my 'fancy' snoods using a stitch called lover's knot.
A cosy Saturday morning at home with my girl, I'm knitting a pretty pink sweater and she's having a little snooze up in her room.
Here we have first of the light silver grey snood restock. This is the large size (mid back hair length) and it's in stock in my Etsy shop right now. Link in bio as ever.