I have had a great day at the Make It Show at Farnborough Airport (yes, there is an airport at Farnborough and its quite busy, though lord knows who feels the need to fly in to Farnborough).  This is turning into my favourite mixed craft show of the year, I swear it gets better every year.  Its on tomorrow too if you fancy it – £9.50 entry and there are quite a few stalls doing free or super-cheap informal workshops so well worth the ticket price. http://make-it.org.uk/home.php

Personally I bought a 3 day ticket for £15 in advance but that option of course isn’t open to you but I’m giving you the opportunity to marvel at my thriftiness for free.

The first thing I did was walk the whole show just to scope it out.  As usual there is a huge seating area with the usual catering (I’m not a fan, its particularly rubbish for veggies or anyone who fancies something healthy but that’s pretty much the deal at all of them) but they’re quite happy for you to bring your own.  They have staff patrolling collecting rubbish so its always tidy enough.  TONS of seating.  Very unusual for a craft fair and I hope they continue to stick with this policy in coming years.  The loos up at the catering end get busy but they’re fine.  At the other end of the hall behind the workshop area there are chemical loos.  I won’t go into details but expect festival conditions.  This is several shades beyond my idea of acceptable.

The variety of stalls gets better every year. There is quite a lot of card making but also knitting, crochet, UK yarns, kits, beading, art, lighting, storage, food, artisan brewery (See the GIN!!), patchwork, embroidery, cross stitch, stamping, oh blimey so much I’m sure I’ve missed out a ton of stuff. 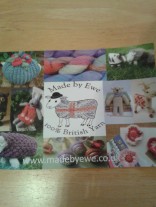 To be honest I wasn’t intending to buy anything on my first walk round I was just scoping but then I saw a really nice shawl/scarf and noticed it was made from that ladder yarn I hate.  Well, my local knitting club has a yearly competition and this year the theme is to make something with ladder yarn.  I wasn’t going to play because I hate novelty yarns and I’m still annoyed that I didn’t win last year after I made a gorgeous cuff with knitted in beads (the theme was Knitting with Beads) and didn’t even get placed.  The woman that won entered a completely repulsive felted bag that she’d tied some beads on to, and the same with the 2nd and 3rd place. Horrible work and the beads were not knitted in.  I’m still put out.  I mean I don’t want to bang on about it but I was robbed. ROBBED I TELL YOU.  So Mrs Made by Ewe had this lovely kit for less than a tenner, you get the yarn, pattern and a big chunky crochet hook with a ceramic bead on the end and I definitely didn’t already own one of those. 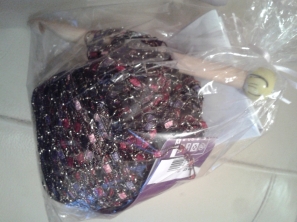 I made a bit of a start on it, to be fair it looks like sort of chain mail g-string at the moment but I’m sure it will be divine when its finished.  I’m going to add some skull beads to stop it being too twee.  You’ll see more of those later.  I’m taking home the prize this year or that local knitting group is going to have recounts until I do.

In the background you will see the back of the bag for life I also bought on this stand.  Very fine thing it is too, I now have enough bags for life to turn Buddhist.

Next up I went to Anita’s Beads. Where is Anita? Has anyone ever met Anita or is the nice bloke who runs it Anita?  The woman ahead of me in the queue to pay had bought literally tons of stuff, she’s bought so much that I lost all shopping guilt and added some crystals to my skull beads.

I bought a couple of rings from him too, I really like polished semi-precious gemstone rings, they’re so cheap at only a pound each. What I’m going to do is use these to weigh the shawlly wrap thing I’m making with the ladder yarn rather than tassels.

The second picture looks like I have sausage fingers, let me assure you my fingers are mere chipolatas, not bangers.

Last year I tried really hard to get to the Beaker Buttons stand to buy a Dorset buttons kit but it was so popular I couldn’t get near it, this year she has a bigger stand and I managed to get in at a quiet moment and have a bit of a chat.  She’s adorable. Really friendly and knowledgeble about the history of Dorset buttons, she also dyes her own yarn and spins. They do workshops and drop in sessions at her shop and I wish she was nearer to me.  You know one of those people that you instantly want to go to the pub with?

At the end I did a workshop with the excellent Riverside Beads. I did a kumihimo workshop with them last year and it was so well done I was happy as larry when I saw they were doing workshops again this year. 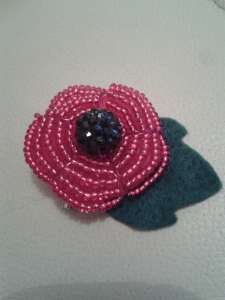 Tell me that’s not fantastic?  They do loads of workshops, they’re based in Peterborough so well worth a visit if you find yourself nearby.  This only took an hour to do, I swear you could do it faster.  They sell a kit for only £8.  They ask you not to share the pattern but they are happy for you to sell any you make and only ask you to donate some of the money to The British Legion. She said they make loads of them in November and donate them to the Legion.  You could use the same principle to make other flowers but the poppy is really lovely.  So easy to do too.

I’m going back tomorrow to have a go at Zentangling, some embroidery and to have a massive chocolate and Bailey’s cookie.

I am a vintage loving maker who loves embroidery, knitting a teeny bit of crochet and beading too. I have an Etsy shop (GinPoodle) where I sell my lovingly made 1940s style snoods (that's a sort of glamorous hairnet if you were wondering) and the occasional vintage knit. View all posts by Tanis Makes Stuff

1940s 1940s hair beading books craft fair Crafting crochet customer embroidery etsy Ginpoodle holiday knitting make-up reviews makeup reviews reviews scarf Sewing shawls shopping snood snoods sock knitting socks Today I'm Making twitter vintage hair vintage knitting vintage style work in progress workshops yarn yarn stash
Really beautiful sunrise here this morning.
Here's a nice suite of snoods made as a custom order for a returning client. It's really lovely when people come back for more 🥰
The fluffiest little tummy. 🥰
What? What's that? That's a medium sized purple cotton snood what that is. There's only one of them so if you like it head to my Etsy shop via the link in my bio please.
Here's a custom order I made recently, it's a cotton lovers knot snood (which I also just call a fancy snood). Of you would like one too let me know but please be warned I have a waiting list at the moment of about two weeks. 😸 #snood #vintagehairstyle #vintagestyle #hairnet #1940shair #etsy